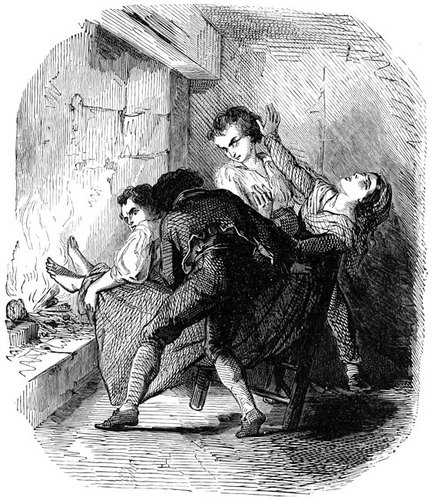 We read about the witch trials of the 1500s and 1600s that occurred in our country, and we are shocked and appalled. We read about how, when events happened that people living in those times did not understand and/or had no explanation for, someone, usually a woman (over 80% of accused witches were female), was blamed for causing it. All it took was suspicion to be laid at their feet by a spurious connection or by an accusation from another person, even if made by a child or extracted from some poor soul by torture. This would then be taken up by the authority figures in the village or town and there you had it; a normal, average, law abiding subject of the crown (usually a poor peasant) suddenly became an evil follower of Satan. A ‘guilty’ outcome was almost always a surety, followed by devastatingly cruel torture and the punishment metered out for this ‘crime’; mostly some form of hideous execution.

How could we have been so ignorant to have acted in this manner we ask? How could we have accused innocent people, especially women, of doing some of the dreadful things they were charged with; killing and eating babies, amongst many, many other ghastly acts? Were tens of thousands of women so different a few hundred years ago from the females of today?

We console ourselves with the fact that this all happened a long time ago, when we did not have the education and knowledge that we now possess, and state with some certainty that this kind of unjust treatment of women could not happen again, not now, not in this century and not in a highly civilised western country such as ours.

Unfortunately, I believe, on some levels it can and does. Not the extreme act of eating babies of course, but our society is capable of accusing innocent people (mostly women, again) of killing their own babies, and then punishing them for this crime. Such acts give rise to an uncomfortable feeling of similarity to our old witch hunting days.

There is much material available to examine, and a great deal of study has been undertaken into maternal filicide, defined as child murder by the mother, infanticide, the killing of an infant, and neonaticide, a term used to describe the killing of a newborn baby. According to some researchers, hundreds of such killings (neonaticide) by mothers go undetected every year. How can this be true? If neonaticides were/are not detected, then how would anyone know they actually occurred?

There is no suggestion in this article that maternal filicide, infanticide and noenaticide do not occur; it would be a senseless and stupid remark to make. What is suggested however is that there should be more diligence and caution in our medical and judicial system when dealing with these tragic, traumatic and harrowing events.

In the UK, there were some high profile cases in the late 1990s and early 2000s, of women being wrongfully accused and imprisoned for killing their own babies’, one such woman was imprisoned wrongly for 11 years. It is not the purpose of this article to identify and discuss the individual details of these women, or their cases. This has been written elsewhere by some who are far more expert and knowledgeable than me of these tragic occurrences and the legal issues involved with them.

The point of this piece is to add my concern to the existing voices of how these women’s lives, and those of their families, have been irrevocably damaged (in some cases destroyed) because of the miscarriages of justice they suffered. Yet, some (not all) of their accusers are apparently allowed to continue with their careers and lives without censure. The heartbreaking deaths of these infants, in the case of the women referred to here, were often, in the first instance, attributed to being ‘cot deaths’ (SIDS), which stands for sudden infant death syndrome. This diagnosis is given when an apparently healthy baby dies without any warning and no other obvious reason can be found. With around 300 cot deaths in the UK every year, SIDS sadly remains the most common cause of death in newborn babies. The woman who spent 11 years of her life behind bars before having her conviction overturned, was found guilty of ‘shaken baby syndrome’ (SBS).

At some point during the investigations of all the women wrongfully imprisoned, the fatalities of their babies were blamed on them, the mothers. In each case, these women were accused of murder, largely because no other cause could be identified for the babies’ deaths, other than foul play. This is in spite of the fact that our medical experts do not completely understand the full reasons for cot deaths (SIDS), and shaken baby syndrome (SBS) is being questioned for its safety in convicting parents of babies that die from brain abnormalities (see site listed 4 below). Yet our society and judiciary have convicted, and possibly will in the future, mothers of killing their own baby based on this limited knowledge and understanding. As a woman, I find this deeply disturbing.

Anyone who reads the case notes of the innocent women acquitted since the late 1990s of murdering their baby or, in some cases, babies, should be very, very concerned. These women could be your wives, sisters, daughters or your granddaughters. The women accused and convicted of killing their own offspring did not belong to one particular social ‘class’ nor were they from any specific ethnic background. This crime has been levelled at women from across the class divide and from different cultural origins. Apparently, no mother is safe. And what of the hundreds of women who are still incarcerated for this crime? I only hope that all of their cases have been judged fairly and thoroughly. It would be a disaster and a complete travesty of justice should we see another rash of overturned convictions in the years ahead of those having been accused and imprisoned, if/when they are eventually found to be innocent of this crime. These are lost years for the female victims and their families that can never be replaced or compensated for.

The problem is, if it has happened before, it could happen again and we need to be vigilant for all our sakes. When you examine the testimonies and opinions given by some of our so-called ‘experts’ in the trials of those women exonerated for the crime of murdering their baby (or babies), opinions at the time of trial that sealed their fate, there are echoes of the witch trials of the middle ages. Sections of the national press also played their part as well, eager as they were at times to label these tragic women as killers.

Fortunately for the mothers in our society, some of the ‘experts’ who helped prosecute these women and send them to jail, have been struck off by their professional governing bodies. This cannot however compare with losing one’s liberty and, as happened in one case, your child; these people should be brought to account for the damage they have caused these women. The overturning of these dreadful convictions should be a very big lesson to the medical and the judiciary system…let’s all hope this has been, and will be remembered in the future!

For more information on some of the cases referred to in this piece, see the sites below:

Amelia writes fiction that incorporates different aspects of the ‘witch’ phenomena, but is also a serious writer about the subject. Her first book to be published is entitled ‘Elizabeth’ and it is part of the ‘Evening Wolf’ series. The story, set in the 1950s, is about a young woman who is accused of being a witch by the backward thinking community she has entered. The story follows her through the ordeals she suffers and how she copes with them.